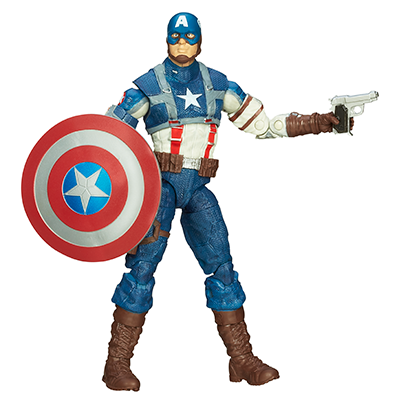 Ages: 4 years and up

Steve Rogers was just a scrawny kid determined to serve his country -- until an experimental formula transformed him into the world’s first super-soldier!
This isn't just any Captain America figure! This 6-inch WW2 Captain America figure looks like the patriotic super soldier, and he wears the vintage costume from World War II. He defends justice with his Vibranium shield. Send him into battle for epic action!
Marvel products are produced by Hasbro under license from Marvel Characters B.V.
Figure comes with accessory.
WARNING: CHOKING HAZARD - Small parts. Not for children under 3 years.
© 2013 Marvel.
© 2013 Hasbro. All Rights Reserved.