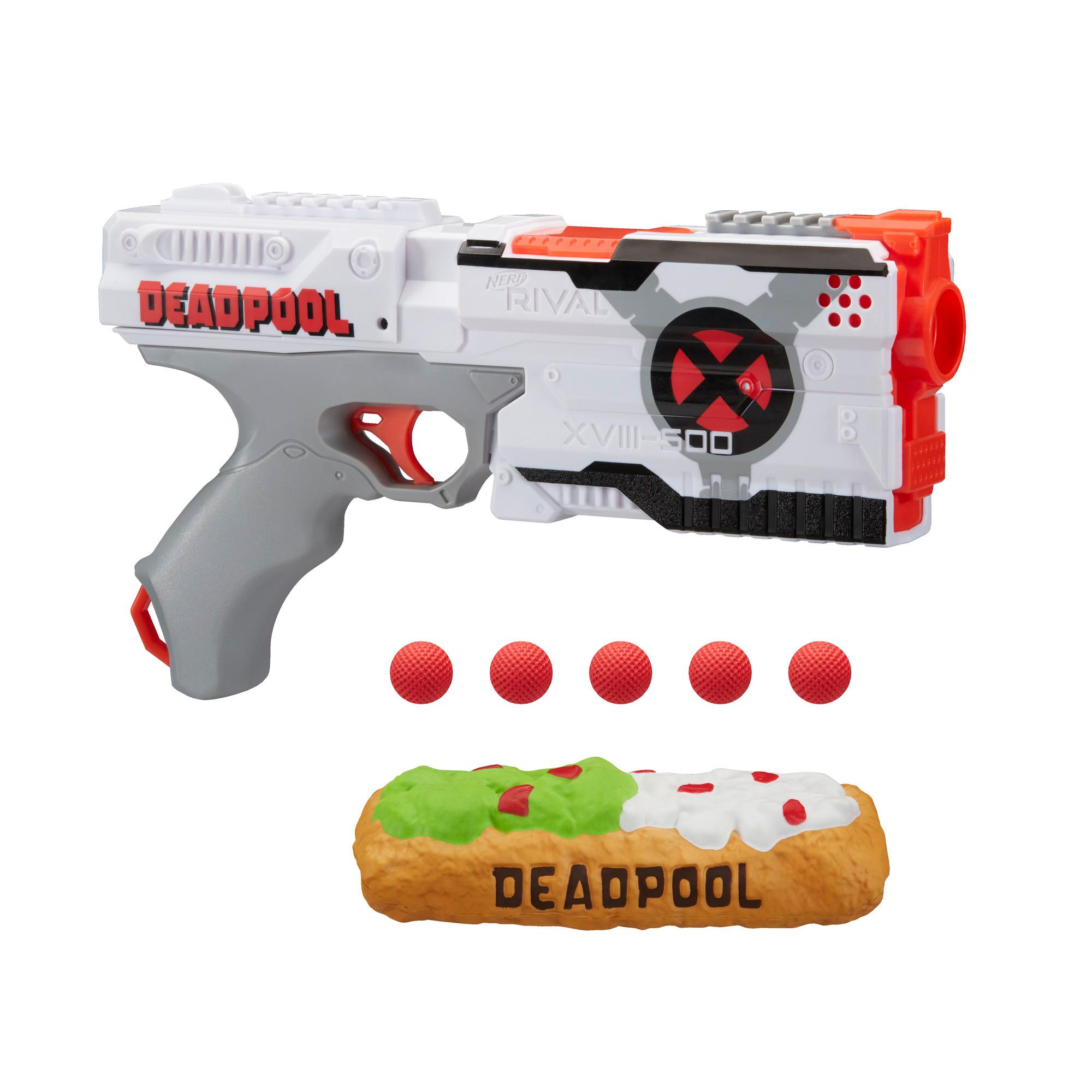 Deadpool, the bad-boy hero from Marvel Comics, brings his snarky personality to this Nerf Rival blaster. The Kronos XVIII-500 blaster features Deadpool deco inspired by his X-Force suit, so when you blast, you're blasting with attitude. It celebrates Deadpool's favorite thing in the world: himself! And it also celebrates his second most favorite thing in the world: chimichangas! A foam chimichanga is included for you to display in a place of honor while munching on the real thing (which is not included, of course). The breech-load blaster holds 5 rounds and has a spring-action mechanism, trigger lock to prevent accidental firing, and tactical rail for accessories (each sold separately). It fires rounds at a velocity of 90 feet per second (27 meters per second) -- which could be how fast the Merc with a Mouth can take down a room full of bad guys while eating a food truck full of chimichangas. Just sayin'.

DEADPOOL MAKES HIS MARK ON NERF RIVAL BLASTING: Blaster features Deadpool character deco inspired by his X-Force suit -- so when you blast, blast with attitude!
DID SOMEONE SAY "CHIMICHANGA"? Includes a chimichanga, Deadpool's food-of-choice before, during, and after every battle. (It's made of foam so you can display it, but, you know, don't eat it.)
KRONOS XVIII-500 BLASTER: Breech-load, spring-action Nerf Rival blaster has a 5-round capacity and comes with 5 Official Nerf Rival rounds. Load it up and start blasting! No batteries required.
90 FPS VELOCITY: No, that's not how fast he eats chimichangas. It's how fast the round is going when you fire it from the blaster: 90 feet per second (or 27 meters per second in metric-speak).
TRIGGER LOCK AND TACTICAL RAIL: Has a trigger lock to prevent accidental firing (no one wants that to happen!) and a tactical rail to customize with Nerf Rival accessories (each sold separately).

• Includes: blaster, 5 rounds, chimichanga, and instructions.
• Ages 14 and up
• For use with Nerf Rival products only.