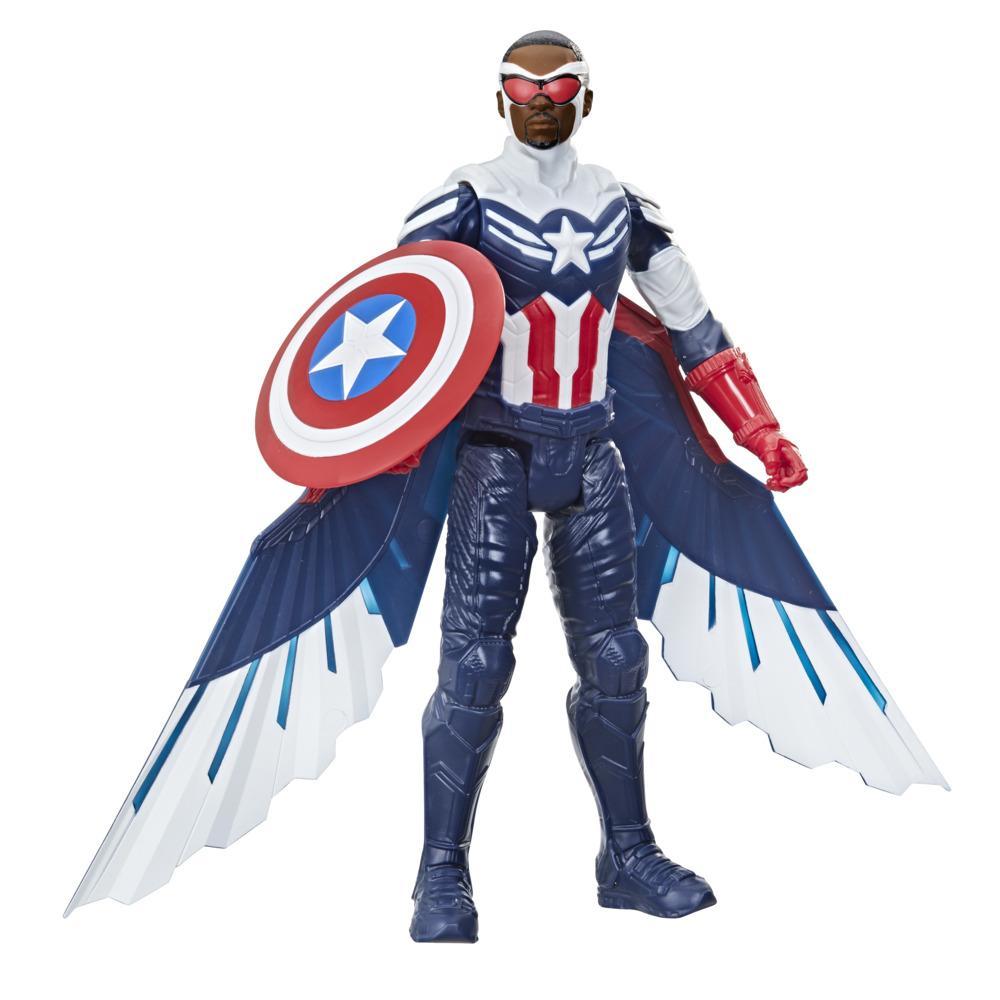 Donning a brand new suit and wings from Wakanda, Sam Wilson proudly takes on the mantle, ready to unite people as the world’s new Captain America! Imagine the brave Sam Wilson flying into battle with this Captain America figure from the Titan Hero Series! Leap into adventure with your favorite Avengers figures and role play items inspired by the Marvel Cinematic Universe. With this entertainment-inspired line of toys, including Thor, Loki, Iron Man, and War Machine, boys and girls can imagine the bold action as heroes battle villains in an epic struggle for the fate of the world. Each sold separately. Subject to availability. Titan Hero Blast Gear launcher sold with Titan Hero Blast Gear figures. Each sold separately. Subject to availability. Copyright 2021 MARVEL. Hasbro and all related terms are trademarks of Hasbro.

•12-INCH SCALE CAPTAIN AMERICA FIGURE: Imagine Sam Wilson flying into battle with this 12-inch-scale Captain America figure, inspired by the character design from Marvel Studios' The Falcon and the Winter Soldier.
•MARVEL CINEMATIC UNIVERSE-INSPIRED DESIGN: Fans can imagine the tech-powered Avengers battling villains in a fight for the fate of the world with this Captain America figure, inspired by the character from Marvel Studios’ The Falcon and the Winter Soldier.
•INCLUDES SHIELD AND DETACHABLE WING ACCESSORIES: This Captain America soars into battle! Figure includes iconic Captain America shield accessory as well as two wings that attach to the back.
•LOOK FOR OTHER AVENGERS SUPER HERO TOYS: Be on the lookout for other Avengers figures and gear to imagine Captain America and the brave heroes defending the world! Each sold separately. Subject to availability.
•CELEBRATING DIVERSE HEROES (AND VILLAINS): At Hasbro, our mission is to make the world a better place for all children and all families. That's why we're proud to make toys that represent diverse heroes (and villains) of every shape and color!

•Ages 4 and up
WARNING: CHOKING HAZARD - Small parts may be generated. Not for children under 3 years.
•Includes: figure and 3 accessories.